The Week in Chess 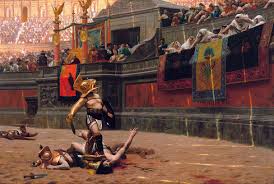 For the chess engines rating lists hobbyists, the newly built Arena 3.5 Chess Gladiators r1 software pack is now available. It is a collection of more than 300 working chess engines combined with the Arena 3.5 GUI software.

This is ideal for amateurs who intended to build their own private chess engines rating list and for anyone who wants less hassle in the creation of tournaments or just watching engine vs. engine matches for education and entertainment with just a few clicks.

Future posts will include the list of best versions for each engine family and possibly a list of the Top 100 chess engines from the Hybrid PGN collection.
No comments:

The initial version of the CCRL/CEGT Combined Rating List is now released. This features the merging of their respective latest rating list PGN files with time control of 40/4 to produce a new one that is better statistically.

The idea of producing this combined rating list was motivated by the desire to have a more reliable information on the strength of chess engines in terms of ELO rating. If we look the statistics of the many chess engine rating list sites, the ELO ratings are so random which are influenced by the many different tournament conditions in hardware, software, chess engine versions, time controls, etc.

CCRL and CEGT are the most popular chess engines rating list sites which have some similar conditions such as having the same 40/4 time time control and creating tournaments with variable CPU cores. Even with this similarity the ELO ratings still fluctuates.  Is there a chance that CCRL and CEGT merge together and combine their resources/expertise to make one ultimate rating list site? The answer is blowing in the wind...

Well, the cat is out. I intend to have another version which will include some other rating sites that have freely downloadable PGNs like FCP and of course the one that I already have. I hope that other rating list  sites will share their rating list PGN archive in the interest of all the chess engines enthusiasts.

The initial CCRL/CEGt Combined Rating List is produced in 2 reports:
All -Everything.
Stripped - without the labels x64, CPU, Deep and others.

I will be glad to hear your feedback on the presentation so that I may improve it even better.  Which one do you prefer?
No comments: